I'm one of “those” people who can sit and watch my cats for hours, observing what they do, how they move, how their whiskers quiver when watching a 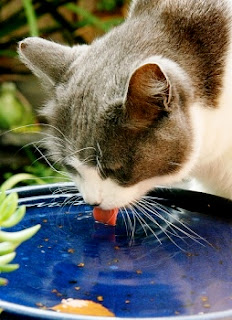 The Science Behind How a Cat Drinks

I'm one of “those” people who can sit and watch my cats for hours, observing what they do, how they move, how their whiskers quiver when watching a bird and other interesting things about them. Cats have a unique way of drinking that has actual science behind it. If you've ever watched closely as your cat drinks, you can see how they defy gravity every time they take a drink.

In 1940, a documentary called Quicker 'n a Wink was shot using stroboscopic photography that slowed down movements which were too fast for us to see with the naked eye. Some of the subjects of the slow motion film were a cat drinking, the beating wings of a hovering hummingbird, and the point of impact on a football by a kicker.
The film was a huge success, and it won an Academy Award in 1941. For many people, seeing for the first time how a cat drinks was fascinating. When a cat laps up a liquid, she curls her tongue backwards to form a “J”, but she doesn't just lap it up, she lets physics do the work for her.

A biophysicist at the Massachusetts Institute of Technology in Cambridge wanted to find out how his cat drank, and with the help of colleagues decided to film cats drinking with a high speed camera to answer the mystery of how cats drink. 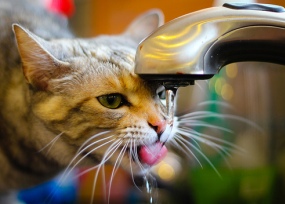 When you casually watch a cat drink, you might assume she's using her tongue like a ladle to “scoop up” what she's drinking, which is how dogs drink. But what is really happening can only be explained as a force of nature.
Cats brush their tongue along the surface of a liquid and let inertia do the rest. Inertia is the concept that something in motion tends to continue in the same direction unless it's broken by other forces. Our feline friends drink by initiating a delicate balance between inertia and gravity.

The process of drinking begins when the cat gently touches the tip of her tongue along the surface of a liquid without breaking it. As she lifts her tongue, liquid sticks to the tip and is drawn upward in a column. The tongue is lifted in a rapid motion, and the stream of liquid grows because of inertia.
When she pulls her tongue into her mouth, the column thins out as gravity begins to pull it back down, and she quickly traps the water in her mouth. She swallows every three to 17 laps. Each lap contains about a tenth of a milliliter.

The process is fast, and in order for her to get a good drink, she has to defy the forces of gravity and inertia, and lap faster than gravity can pull the liquid back down into her bowl. Timing is crucial, because a column of water is at its thickest and longest point just before gravity begins to pull it back down.
If the mouth is closed too soon, she misses part of the water; if she closes her mouth too late, she will lose the entire column. The balancing act is to grab the column at the optimal time for the fullest and most satisfying gulp. 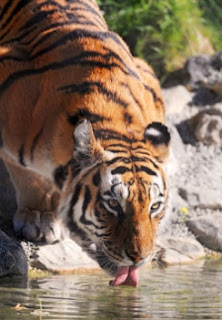 Scientists viewed high speed film of big cats as well, and discovered that all felines drink using this amazing balance between inertia and gravity. The only difference is that big cats lap at a slower rate,
because that's what it takes for them to balance out inertia and gravity. It's believed cats can control their tongue speed, drinking at a slower or faster rate depending on the amount of liquid they want to ingest in each lap.

One of the co-authors of the study, a mathematician at Princeton University named Jeffrey Aristoff, said “This suggests that cats are smarter than many people think, at least when it comes to hydrodynamics.
” Needless to say, we cat owners already know that our feline friends are smarter than non-cat people give them credit for. Now we can add their use of physics to drink to the list of their natural abilities.

Little by little, scientists are discovering that animals have innate skills that help them survive. Perhaps the one thing we can learn from the science of how cats drink is the meticulous method cats use to keep their whiskers and chin dry. This is very unlike dogs, who lap away at a bowl of water with no concern to how much is running down their chin. Leonardo da Vinci said “The smallest feline is a masterpiece,” and apparently a very good student of physics as well!