The Dachshund may not look feisty, but this short-legged dog is a badger's worse enemy. This breed was created to hunt – a job they are extremely good 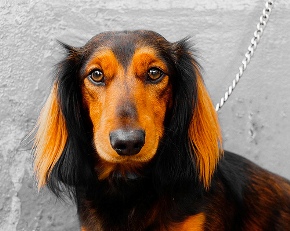 The Dachshund may not look feisty, but this short-legged dog is a badger's worse enemy. This breed was created to hunt – a job they are extremely good at – and is the only AKC recognized breed that was developed to hunt above and below ground.

The Dachshund is the smallest member of the Hound Group, even though he was bred to go to ground after his prey, like a terrier. In 1874, the Dachshund was recorded as a German Badger Hound in the English stud book, which started a somewhat heated debate.

Is the Dachshund a Hound or a Terrier?

A breed expert was quoted in 1906 as saying, “That it is used occasionally as a hound in the sense that it follows rabbits and hares by scent as does a beagle, does not alter the fact that it is essentially a dog that goes to earth and is therefore a terrier.”

Dog historian Edward Ash also got in on the debate in 1927 saying, “A Dachshund is, in fact, a terrier with very crooked legs, but possessing in a very great degree both the appearance and fine nose of the beagle.” Needless to say, this breed has fine qualities of both the hound and terrier!

The Dachshund was created in Germany in the early 1600s, but illustrations of dogs with short legs and elongated bodies hunting badgers have been found dating back to the 1400s, and writings from the 1500s mention the “earth dog,” “dachsel,” and “badger creeper.” In Germany, this breed is known as the Badger Dog, and the Teckel. The German word for badger is “dachs,” and “hund” means dog. 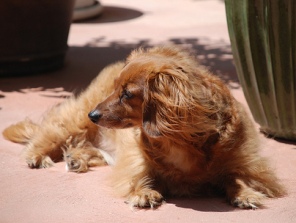 Credit for the slow development of the Dachshund is given to 18 and 19th century German foresters (caretakers of the forests) who took their time perfecting a smart and courageous dog. They carefully crafted this breed over a number of years to design a skilled hunter capable of digging into burrows underground.

In the early years of the breed, Dachshunds were a variety of sizes. Larger dogs weighing 30 to 35 pounds were used to hunt badgers, and packs of dogs would hunt wild boar.
Fox and deer hunting Dachshunds were 16 to 22 pounds, and 12 pound dogs were used to hunt hare and weasel. There was even a 5 pound version for a short period of time that was used to flush out cottontail rabbits.

Foresters wanted a dog adept at following a badger into a den, with an equal amount of courage and fierceness to match a powerful foe. Badgers normally aren't aggressive, unless provoked, so a dog needed to be fearless, strong and tenacious. The dog's elongated body was carefully and purposely designed to do his job effectively.
Powerful short legs and over-sized, paddle-like paws allow the dog to dig deep into the earth. A long, sturdy tail, extending straight out from the spine, provides a hunter with a handle to pull a dog from a burrow. Loose skin protects against tearing as he scoots along a tight tunnel.

His long nose increases his ability to draw in odors, and a deep bark, which is loud for a small dog, lets the hunter know where to locate him in a tunnel, or when he's trailing prey above ground. The Dachshund may be short-legged, but this breed is much faster than most people realize, and stronger than he looks. These dogs were bred to fight a badger to the death, if necessary. 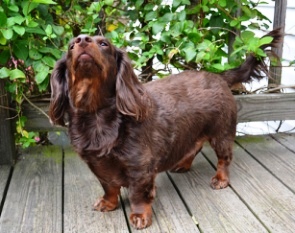 Slipped discs in their back is a common health concern in Dachshunds. This can lead to partial paralysis, and sometimes complete paralysis. It's important to monitor your Dachshund and avoid letting him jump from high places; even a jump off a couch or chair can cause slipped discs.
When holding them, make sure to support their back. Because of their elongated back, an overweight dog is more at risk. A premium dog food, like one of CANIDAE's grain free Pure formulas, can help keep your Dachshund at a healthy weight.

Dachshunds come in three coat varieties: smooth (original type), longhaired and wirehaired; and two sizes: miniature (11 pounds and under) and standard (16 to 32 pounds). A Dachshund weighing 11 to 16 pounds is called a tweenie.

These cute little dogs love to play, and are intelligent, athletic, independent thinkers, stubborn at times, and love to bark. They are rarely used in hunting today, but they are fantastic earth-dog competitors. These bold dogs aren't shy at showing their hunting skills above or below ground.
Since the 1950s, the Dachshund has been one of the most popular breeds in the United States, and this feisty little dog sits at the number 10 spot on the AKC's most popular dog list. The Dachshund is a powerful digger, so you might want to make sure your flower gardens are off limits.