People who like cats with a wild look are naturally drawn to the Chausie, an exotic feline with Jungle Cat ancestry 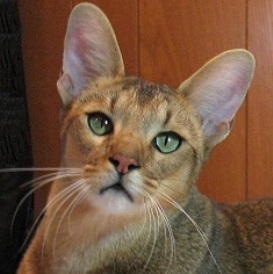 People who like cats with a wild look are naturally drawn to the Chausie, an exotic feline with Jungle Cat ancestry. With their long legs, long, lean body and statuesque appearance, Chausie cats are exquisitely beautiful creatures.

However, the Chausie (pronounced chow-see) is not for everyone. This unusual cat breed requires an experienced owner who can meet the demands of a very active, assertive and athletic feline that needs a lot of interactive play and attention.

This high energy feline is rarely idle; they prefer physical and mental stimulation to lazy catnaps on your lap. The Chausie is sociable, affectionate, good natured and intelligent. They have a very curious nature and can be fearless, so keeping them indoors at all times is essential. The Chausie is highly trainable and can be taught to fetch. Their exceptionally playful demeanor lasts well into adulthood.

Despite their wild ancestry, Chausies can develop deep bonds with their owner and do not like to be left home alone for long hours. Their movements are very “cougar-like” and they are excellent jumpers with the ability to reach high places with ease (such as the tops of doors). 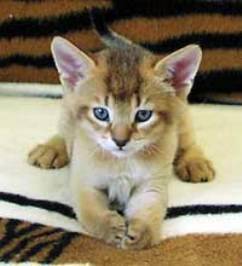 Bred to retain the look of the Jungle Cat, this medium to large domestic feline is tall, sleek and elegant. The short haired cat has large tufted ears, slanted cheekbones, a long sloping forehead and a slightly shortened tail.
Their muscular body is built for running and jumping, which they do very gracefully. The Chausie’s deep chest enables them to breathe deeply which adds to their impressive endurance level. The males are usually larger than the females, and can weigh up to 25 pounds!

This rare breed is the result of breeding domestic cats with the Jungle Cat, a wild species that dwells primarily from the Nile Valley to the Caspian Sea. The breed’s name is derived from the Latin name for the Jungle Cat, felis chaus.
The Jungle Cat dates back to ancient Egypt, where they were apparently held in high regard – mummified Jungle Cats have been found in Egyptian tombs. Some cat fancier’s believe that the statues of the Goddess Bastet were modeled after the svelte Jungle Cat.

The Chausie breed is not recognized by the Cat Fancier’s Association (CFA) but was granted foundation registry status by The International Cat Association (TICA) in 1995. Due to the effort of breeders and their work, the Chausie was given Championship status earlier this year.

Though certainly not the right pet for everyone – especially those who want a laid-back cat who demands little attention – the Chausie can be a wonderful pet for someone who understands this wild-at-heart feline’s needs and can meet them.

Top and bottom photo by PiBeseth
Middle photo by GorillazFanAdam