What Is Vestibular Disease in Dogs And Cats?

Vestibular disease can strike dogs and cats suddenly. Your pet is fine one minute and the next, he's struggling to stand and walk. One of my older cat 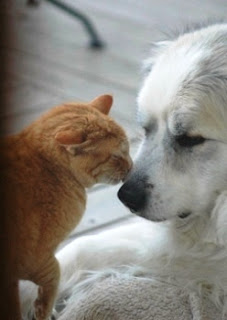 Vestibular disease can strike dogs and cats suddenly. Your pet is fine one minute and the next, he's struggling to stand and walk. One of my older cats developed vestibular disease years ago. At the time, I had no idea what it was.
Understanding vestibular disease is important because the symptoms mirror those of a stroke as well as other medical conditions, and it can be misdiagnosed.

My cat, Patches, was sitting upright when she suddenly fell over on her side and couldn't get up. Her eyes were moving rapidly back and forth and her head was shaking. It was a scary moment and I was convinced she’d just had a stroke.
I called my vet and he decided she could wait until the office was open the next morning. By then she seemed better and had regained her balance. Come to find out, it was idiopathic vestibular disease and not a stroke as I had feared.

The Vestibular System Is How Animals

Including us, know which way is up or down, if we're spinning around, standing, moving, sitting or lying down. In general, it's responsible for maintaining our sense of balance and controls head and eye movements. Without getting too technical, the vestibular system is made up of nerves in the brain that continue into the inner ear.
The vestibular apparatus is located next to the cochlea that's found deep in the inner ear, and another one is located in the medulla (the lower area of the brain) which is found at the top of the spinal cord.

Specialized nerve cells and receptors are in the vestibular apparatus. A sense of balance is maintained because the vestibular system automatically compensates by sending a signal to muscles on one side of the body to adjust to a change in position. When there's a problem with the vestibular system, disorders are divided into two different types:  Central and Peripheral Vestibular Disease.

Central means inside the central nervous system (in the brain) and is the most serious. Peripheral is outside the central nervous system (in the inner ear), and is seen most often in pets. For unknown reasons, it's common for cats living in the northeastern area of the country to be struck with peripheral vestibular disease in late summer to early fall.
It affects young and middle aged cats. In the southeastern part of the country, eating the tail of the blue-tailed lizard has been linked to peripheral vestibular disease. Central vestibular disease is not as common as peripheral, but it is more serious. To determine which one is affecting a dog or cat, blood work, a CT scan, MRI or x-rays are necessary. 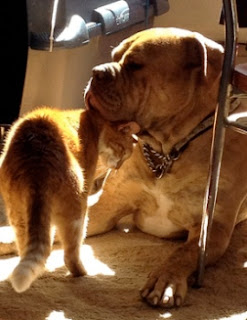 Inner ear infection, inflammatory diseases, tumors, cancer, or brain lesions that can be caused by injury or disease. Symptoms include: vomiting, nausea, head tilt, motion sickness, weakness, staggering around, involuntary spasms, difficulty staying upright, nystagmus (eye movements from side to side, up and down, or rotating around), falling to one side, circling when trying to walk, and drooping face.

Idiopathic means there is no known cause for the disease. Canine idiopathic is commonly called old dog vestibular disease because it's more likely to strike older pets, but all ages, male and female, can be affected.

Symptoms appear out of the blue and can resolve themselves just as quickly. For many pets, improvement begins to take place within 72 hours, and they are back to their old selves in one to two weeks. Some affected pets may have a permanent head tilt after recovery.

At one time, it was believed strokes in pets were rare, but with advances in testing, strokes are more common than once thought. The good news is they usually aren't as debilitating in animals as they are in humans, but it's still a serious medical concern that can affect a pet's long term health.
Symptoms include a loss of balance, falling down, turning around in circles, vision loss, and head tilt. To make a diagnosis, a vet needs to look at the brain with a CT scan or an MRI.

Since vestibular disease can resemble a stroke, affected pets can be misdiagnosed. It's important to be aware of vestibular disease to be better informed when discussing a pet's symptoms with a vet. My vet suggested waiting a few days before moving forward to see if my cat's condition improved.
I'm thankful my vet knew the difference between a stroke and vestibular disease, and gave Patches the time she needed to recover.