Dogs are famous for their acute sense of smell. Beagles have been employed as bed bug detection dogs, and they sniff bags in airports to check for 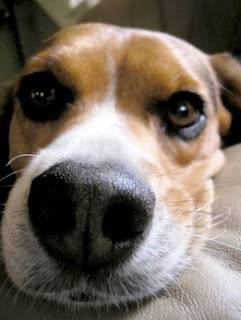 The Dog Nose All: The Power of A Dog's Nose

Dogs are famous for their acute sense of smell. Beagles have been employed as bed bug detection dogs, and they sniff bags in airports to check for illegal fruits and vegetables being brought in by travelers. Drug and bomb sniffing dogs are trained to detect the smallest hint of contraband or explosives.
More recently, archaeologists have discovered a dog with a good nose can be trained to search for smells that will tell us about our historical past buried in prehistoric grave sites. Now that's a dog with a keen sense of smell!

When comparing scent receptors, we humans are woefully inadequate to dogs. Humans have around five million scent receptors in their nose, and the average canine has around 200 million. Adding to a dog's extraordinary scenting ability is an organ located on the roof of the mouth that allows them to “taste” a smell, as well.
So when we catch a whiff of steaks grilling on a BBQ close by, you can imagine how that mouth-watering scent is affecting your dog. Dogs are also capable of honing in on one specific smell among many. Once they find what they're looking for, their focus is on that one smell, and they can follow it to its source. That's why it's nearly impossible to evade a tracking Bloodhound.

Historical Human Remains Detection dogs (HHRD) are trained to sniff out lingering odors from bones and teeth in old grave sites, some that may be thousands of years old. These unique canines are the newest detection dogs, and they help humans search for information underground that is difficult for us to find on our own. These specially trained dogs have been used by archaeologists, construction companies and ordinary people to locate American Indian burial sites, lost family cemeteries and unmarked grave sites.

We live in the present, but our history is buried in the past. We learn who we are as a people by understanding who we were in the past. Spread across this land are historical and prehistoric grave sites that can take us back to another time. In many cases, finding a hundred-year-old family burial spot isn't of any real value to most people, but it is to the family searching for their roots.

Prehistoric bones found in a site somewhere out west may not be of particular interest to the average person, but it could reveal another clue to someone's ancestral history. Our buried history is spread out across the country as this land was settled by pioneers. Finding these burial sites, especially ones with historical value, allows archaeologists to preserve another part of our past before it's covered over by a highway, parking lot or office building. 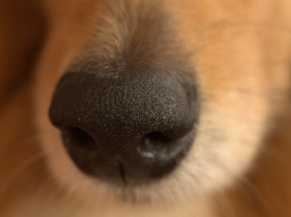 The advantage of using dogs to detect odors beneath the ground is that it's a non-evasive method, and it can save time and money. Instead of having to search an entire field to find ancient bones, the dogs are quickly able to pinpoint a location.
Along with other searching tools, like ground penetrating radar equipment, a search team has a better idea of where to focus their attention. Dogs have been used a lot on the West Coast to identify sacred Native American burial grounds before an area is developed.

These bone sniffing dogs have been helping researchers find evidence to piece together the tragic story of the Donner Party who in 1846 found themselves trapped in the worst snowstorm to hit the Sierras. Only 40 people out of 81 survived. The dogs were able to pinpoint other possible campsites that had been missed by archaeologists, and find small bones that can be identified if current family members can supply DNA.

A Historical Human Remains dog named Nessie worked with archaeologists excavating a Neolithic Age site from 5000 BC located in Prague, Czech Republic. The Border Collie also located previously undetected graves dating back to 450 A.D. on a construction site in another part of Prague.

Because a dog's nose is so powerful, law enforcement officials and archaeologists have discovered a canine can locate a grave site much faster than they can, and the dogs have established an impressive record for being right. Finding ancient burial grounds, unmarked graves from years past, or long lost family cemeteries is important to the people searching. And it's a job only a dog can do, because of his incredible and powerful nose!