Do Dogs Fall in Love Like in the Movies?

Remember that romantic kiss scene in Lady and the Tramp? You know the one…where they are eating a big plate of spaghetti and unknowingly slurping away 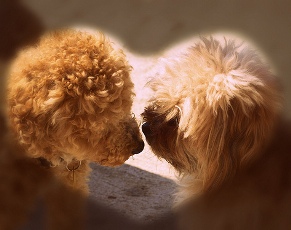 Can Dogs Fall in Love?

Remember that romantic kiss scene in Lady and the Tramp? You know the one…where they are eating a big plate of spaghetti and unknowingly slurping away at the same noodle, until their snouts meet in a smooch. Then Tramp noses the last meatball across the plate to Lady.

Aww. So adorable, right? Not to kill the cuteness factor, but have you ever wondered whether dogs can really fall head-over-paws in love like that?

Doggy love is a hard topic to find solid research on, maybe because it’s hard to qualify the emotion separate from simple affection. A lot of scientists seem to just flat out not believe in it.

Anthropologist Elizabeth Marshall Thomas, author of The Social Lives of Dogs, believes that dogs can fall in love. In her book, she tells the story of Sundog and Bean, two dogs that met each other by chance and only had the pleasure of each other’s company for a brief period of time. Bean’s owner was a builder and they were off as soon as the job was finished.

Sundog would still faithfully wait to hear the sound of the vehicle Bean’s owner drove, but to no avail. He stopped eating and slept more often. Even bringing in another female dog didn’t interest him. As for Bean, her owner believed she was yearning for Sundog, even to the extent that she would run away, looking for him.

Sundog and Bean’s doggie “romance” may not be quite like it is in the movies, since their story lacked a happy ending, but their love seems real enough to me. Even a little reminiscent of Ben and Jade’s touching story, “Ties that Bind: What One Dog Did for Love.” Except that Ben and Jade did have a happy ending where, after trials and tribulations, they found each other again…much like Beethoven and Missy in the movie Beethoven’s 2nd. 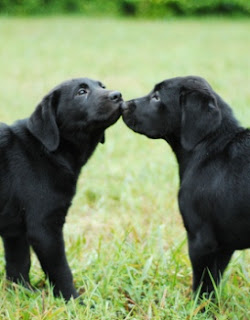 I’ve only had two dogs that I ever considered “in a relationship.” Bo and Daisy were malamute and husky mixes that were bonded from birth. They played together and had puppies together.

Daisy passed away first and although Bo was sad, he seemed to recover fairly quickly. I’m sure this had much to do with his incredible bond with my mother. So were Bo and Daisy two dogs in love?
It’s not like they were separated long enough to search each other out like Ben and Jade did and dramatically prove their devotion, but who am I to judge? I think it’s entirely possible they were “in love.”

So yes, it seems to me that dogs can fall in love with other dogs, just like Perdita had her Pongo in 101 Dalmatians and Marmaduke had both his Jezebel and, ultimately, his Mazie. Maybe one of these days I’ll get to witness my Wuppy nosing his CANIDAE Pure Heaven treats over to the love of his doggy life. We’re not just talking about fleeting puppy love here, but a long-lasting, deep emotional bond. Surely that’s favorite treat share-worthy!

Has your dog ever fallen in love with another dog?