William Braden, the creative genius behind the Henri, le Chat Noir empire, has done what I’ve dreamt of doing for years. William not only put his cat

William Braden, the creative genius behind the Henri, le Chat Noir empire, has done what I’ve dreamt of doing for years. William not only put his cat to work, but now supports himself fully with Henri-related ventures!

Whereas most pet owners merely watch their cat or dog blissfully sleeping away and just wish they’d wake up and do something to defray the cost of their kibble, William had a vision.

Well…actually I made that last part up. I don’t really know if William had a vision for his now-famous French-speaking cat or not, way back in 2006 when Henry (the tuxedo kitty’s real name) appeared in his first internet video. But after the second video catapulted Henri to fame, lightbulbs surely went off in William’s brilliant mind.

He Had Created an Unforgettable Character

The world’s first existential cat philosopher – who was filled with ennui and bent on pondering his tormented existence. Filmed in black and white to parody French film noir, William’s video won the Golden Cat Award at the 2012 Internet Cat Video Film Festival, and late film critic Roger Ebert declared it “The best internet cat video ever made.” Yes, it’s that good!

Legions of Henri fans snapped up the t-shirts, coffee cups, posters, mouse pads, Henri “pawtographs” and other merchandise that followed, and now…William lives off his cat! At least that’s what the press release said for the latest Henri endeavor – a delightful little book titled The Existential Musings of an Angst-Filled Cat. 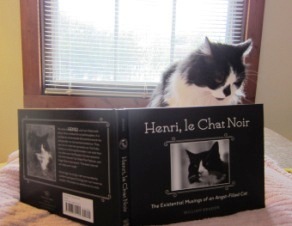 The hardcover book (in black and white, naturally!) is a collection of doleful Henri quotes that purrrfectly illustrate the disenchanted house cat’s cynical outlook on life. There are also 45 gorgeous photos, mostly of the handsome Henri but a few of his supposedly simpleminded feline roommate, aka “the white imbecile.”

If you’re a fan of the Henri videos, you simply must have The Existential Musings of an Angst-Filled Cat in your library! It also makes a great gift for a cat lover. Here are a few of my favorite quotes from the book:

"When I watch you go about your activities, make no mistake about my intentions. I am not curious or coy. I am judging you."

"I sleep because every time I open my eyes, the world is still there."

"Looking into the garden today, I saw another version of myself meeting my gaze. A celestial counterpart, free in all the ways I am trapped, yet longing for the safety of my prison. It turns out it was just a raccoon."

“Cat treats are a poor substitute for real answers to the mysteries of our existence. Yet, I do not reject them.”

“My thumbs are not opposable, yet I oppose everything.” 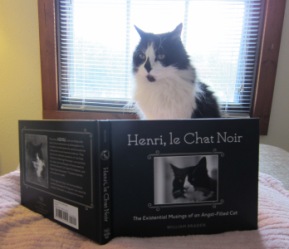 If I had one itsy bitsy quibble with this great book, it would be that the experience of reading it is far too short. It’s certainly not a book you’ll take on summer vacation to while away a lazy day at the beach. In fact, you can finish the book in ten minutes.
I definitely wanted more Henri after that last page! But here’s the thing – you’ll come back to the book again and again, and each time the experience will be just as enjoyable.

Buy it. Read it. Give it to a fellow cat lover. Or keep it on your coffee table to (in Henri’s own words) “make you look smart.” Indeed!

Henri, le Chat Noir: The Existential Musings of an Angst-Filled Cat is sure to become a cat classic.

Disclosure: The publisher provided me with a copy of this book for review, but all opinions and philosophical musings in this post are wholly my own.