Ties That Bind: What One Dog Did For Love

Two stray dogs living on the streets of Terre Haute, Indiana met and “fell in love,” or so the story goes. Life took an abrupt turn, however, when the 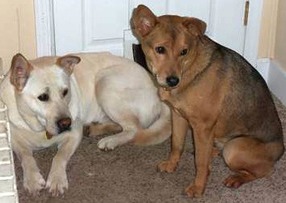 The Ties That Bind

Two stray dogs living on the streets of Terre Haute, Indiana met and “fell in love,” or so the story goes. Life took an abrupt turn, however, when the two became separated. But one of the dogs wasn't going to let anything stop him from being reunited with his best four legged friend.

Four and a half year old Ben, a mixed breed, and one year old Jade, a German Shepherd mix, were well known strays that called the streets of Terre Haute home. How they met is anyone's guess, but over time an incredible bond grew between them.
The dogs were looked after by locals in the community, but the pair remained skittish of humans. When Jade became pregnant, the Terre Haute Humane Society (THHS) decided it was time to rescue both dogs.

Since they were comfortable with each other, the shelter kenneled them together until Jade gave birth to six healthy puppies. It was decided that they would be better in a foster home environment until the pups were weaned, and were moved to the home of Kali Skinner,
One of the THHS adoption counselors. According to Skinner, “Jade was timid, but a very caring mother.” When the pups were old enough, they were put up for adoption and all quickly found forever homes.

Ben was overjoyed to see Jade when she returned to the shelter, and life was good until a young couple stopped in looking for a dog to adopt. Courtney and Jason Lawler fell in love with Ben, but they didn't want two dogs. The couple's three year old son, Peyton, and one dog would be all they could handle – or so they thought.
Ben was led away from the shelter and his best friend, and Jade was left alone in the kennel. This might have been the end to this sad story of two friends saying goodbye, but Ben had other ideas and wasn't about to be separated from his love.

Ben was adopted about three weeks before Christmas 2012. Three days after Christmas, Jason was talking on his cell phone as he took the garbage out. While Jason was distracted, Ben raced out the door and started running, never once stopping to look back. All Jason could do was yell his frustration as Ben ignored him and disappeared from sight. 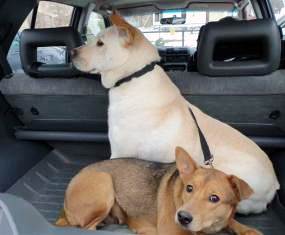 The couple began to search their neighborhood. What they didn’t know, however, was that Ben had set off to find Jade at the shelter, which was ten miles away.
He arrived there the next night, and when the shelter called the Lawlers, they were shocked to learn Ben was able to go that far in such a short time.
(Never underestimate the power of a close bond or the determination of a street wise canine!). The couple was aware the two dogs had been rescued together, but had no idea how closely bonded they were.

Jade was inside a fence when Ben got to the shelter. He gave her a kiss through the fence but refused to go inside, as if he detected danger. It also seemed like Jade was trying to warn him to stay away. Workers from the shelter tried to capture him, but he was too quick and used his street smarts to stay one step ahead of them.
It took a couple of hours before they were able to corral him. By then, the Lawlers had arrived at the shelter to pick up Ben. They took him inside to see Jade before leaving, and that's when they realized how close the two dogs were. Ben would never be completely happy without Jade, so they did what any compassionate pet owners would, and adopted Jade, too!

The ties that bind can't be fully explained, and when a bond is strong it can't be broken by time or distance. On the streets, Ben and Jade shared a bond that grew deeper day by day. They looked out for each other, depended on each other, and gave comfort and companionship to one another.
Isn't that what love is all about? To this day, Ben and Jade are inseparable, and both have formed a close bond with the Lawler's son. The two strays finally found their forever home – together.