The Sand Cat: a Small But Fierce Desert Wild Cat

The sand cat might just be the cutest of all wild cats, and it’s also one of the smallest. Don’t let that sweet face and tiny body fool you 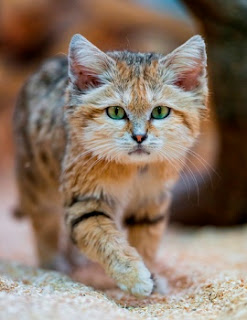 Fascinating Facts About the Sand Cat

The sand cat might just be the cutest of all wild cats, and it’s also one of the smallest. Don’t let that sweet face and tiny body fool you, though this desert wild cat is tough as nails! Well yeah…it would have to be, to survive the harsh conditions where it lives.

Found in both sandy and stony deserts, the habitat of the sand cat (Felis margarita) ranges from North Africa's Sahara Desert through the Middle East into Central Asia. Although “sand cat” might seem to be a nickname related to its habitat, it is the cat’s actual name.
Also called the sand dune cat, these plucky felines have adapted to the extreme temperatures and dry conditions in the desert. Their feet are thickly padded with fur to insulate them from the hot sand.
They have large ears which help them hear their prey, and they are excellent hunters – a small rodent like a mouse does not stand a chance against a sand cat! 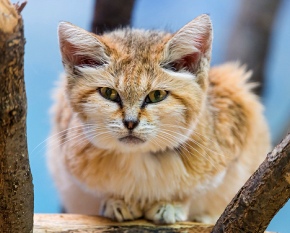 This hardy feline can survive in temperatures ranging from 23° F to 126° F. During extreme heat, the sand cat stays cool by retreating to an underground burrow.
They use abandoned fox or porcupine burrows, but are also good at digging and will enlarge the small burrows of gerbils or other rodents.

Perhaps most impressive of all is that sand cats do not need to drink a lot of water. Although they do drink water when it’s available,
if necessary they can get the moisture they need from their prey. This allows them to live comfortably in areas that are far from a water source. 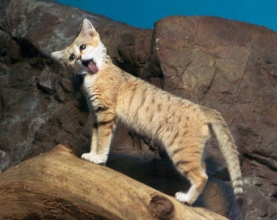 Sand cats are shy, solitary creatures, coming together with others of their kind only during mating season. They communicate using scent and claw marks, and by spraying.
Although this wild cat makes vocalizations that are similar to domestic cats, they also make loud, high-pitched sounds that resemble barking.

Sand cats move with their belly to the ground, traversing their territory in a fast run with sporadic leaps. They can sprint at impressive speeds of between 19 to 25 miles per hour. They have large home ranges, with one male claiming an area of about 6 square miles.

Sand cats are nocturnal, actively hunting and traveling throughout the night before retreating below ground at dawn. Small rodents are their primary prey spiny mice, gerbils, desert rats, jerboas and young cape hare. They also hunt small birds and consume reptiles and insects. 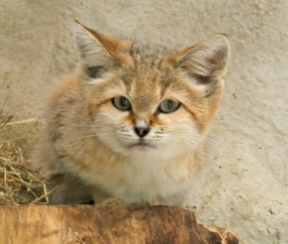 The sand cats digging ability comes in handy when they catch prey too large to consume in one meal; they just bury their leftovers in the sand for later! They are also very good tree climbers.

Sand cats weigh between 4 to 6 pounds and have a lifespan of up to 15 years. The cats are endangered in the wild, but you can see them every day in some zoos, including the Cincinatti Zoo.

Can’t get enough of exotic felines? You can read about the Margay, the Bengal and the Ocicat in the CANIDAE RPO archives.