Colleges and universities often bestow honorary degrees to individuals for outstanding contributions or distinction. Sometimes it's a four legged 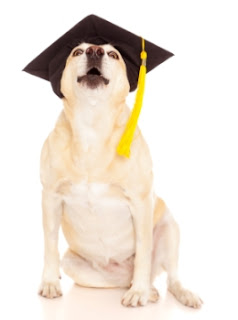 Amanda Davis is legally blind, but having a disability didn't stop her from realizing her dream of getting a law degree. While she was getting her undergraduate degree at the University of Tampa, she was paired with a black Lab named Ellis after she applied for a guide dog from the Seeing Eye in Morristown, NJ. Davis was accepted into the New York Law School to continue her education, and Ellis was by her side the entire time.
The school made room in the classrooms and gave Ellis time for breaks when they were needed. When Davis and Ellis crossed the stage on graduation day in 2012, she received her law degree and Ellis was given an honorary degree for his outstanding work as a service dog.

In 2011, a 2 year old yellow Lab named Samson graduated from and received an honorary degree from Oklahoma University. He entered the hallowed halls of higher education as an eight week old pup. Occupational therapist and faculty member in the Rehabilitative Services Department, Dr. Mary Isaacson, would spend the next two years training Samson as a service dog.
Part of his training included learning how to hold open doors, retrieve objects on the floor, and turn lights on and off. Samson completed his education, donned his cap and gown, and graduated as a certified service dog ready to assist someone living with a disability in Oklahoma.
When Samson received his honorary degree, he sat and shook the Dean's hand, like any other graduate. The 300 other graduates were thrilled to share their special day with a dog they knew and loved. 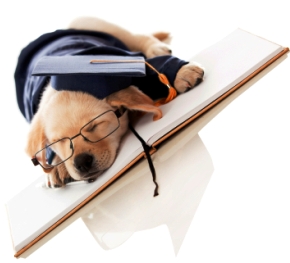 In 2008, a one year old Golden Retriever named Zeeke received a bachelor's degree in canine companionship from Ohio Northern University. J.J. Coate, a biology and pre-veterinary medicine senior, gave Zeeke thousands of hours of training as part of her honors project.
The university decided to give the dog an honorary degree for all his hard work. Zeeke was trained to pull a wheelchair, open doors and pick up objects off the floor. Coate did her project in partnership with Canine Companions for Independence, an organization that places service dogs with disabled people free of charge.

In 2005, a six year old Welsh Corgi mix named Elvis received an honorary degree in calculus from Hope College in Michigan. Elvis helped his owner, Dr. Timothy Pennings, a math professor at Hope College, teach his students a standard calculus problem finding the quickest, not the shortest, path between point A and point B.
Pennings was tossing a tennis ball into Lake Michigan one afternoon for Elvis to retrieve, when he noticed the dog took the quickest and most efficient route each time to retrieve the ball. If he threw it close to shore, Elvis swam directly to it, but if it was thrown farther out, he ran along the shore line until he came to the optimal point, which is the quickest path from A to B, and then jumped into the water and swam to the ball.
Pennings continued to experiment, tossing the ball in different directions and distances, calculating each path Elvis ran. He discovered Elvis was within a foot of the optimal path every time. To Pennings, this suggests that dogs may have the ability to problem solve… or they are good at calculus.

An eight year old Golden Retriever named Dylan crossed the stage in 2012 at Wright State University, not to receive a degree for himself, but to accept a posthumous degree in Psychology for his 23 year old owner who had passed away. Samantha Laux spent three years working on her bachelor's degree while battling a neurological disease that left her deaf, blind and in a wheelchair.
She was forced to quit school before graduating because of her disability. Samantha was a courageous young woman who accomplished a lot in her short life, and didn't let her disability define who she was.
She fought for and got an on-campus park for service dogs where people could find a safe place to spend time with their dogs, and she wrote four children's books about service dogs to honor Dylan and what he did for her.